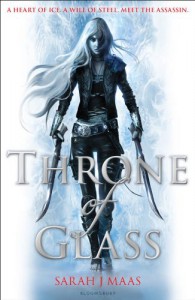 Ten years ago, when she was 16, she published an early version of Throne of Glass online. Over the next decade, she revised and tweaked and built up a fan base of thousands. Last week, thanks to that supportive fan base (and a really great book!), Throne of Glass was published—and I’m so glad I discovered her!

It’s the story of Celaena Sardothien, the world’s greatest assassin, whose very name strikes fear in the hearts of the inhabitants of the kingdom Adarlan. She is known by name and reputation alone—those closest to her know she’s only a teenager. Celaena is strong in body, heart, and mind; as a character on the page, she’s multilayered and a whole lot of fun.

Throne of Glass stands on its own, but I insist before you pick it up you read the four prequel novellas Maas wrote to introduce Celaena and put the events of the novel into context. They start two years before the events of Throne, are about 80 pages long each, and are only available as $.99 eBooks. These four novellas alone are really fun stories, and honestly I can’t imagine reading Throne of Glass without having read them first.

I enjoyed reading Throne of Glass immensely! The story is light enough you don’t have to think too much, but strong enough to entertain and intrigue. While there is enough back story to fill volumes—and I expect eventually it will—the book comes to a nice and happy end without a cliff-hanger that would have left me aching and unsettled. Instead, I can wait patiently for the next installment of Celaena’s adventures. I promise, I’ll be first in line!

There is some unnecessary language and some mild sensuality and innuendo in the last two novellas, and some PG violence throughout all the books, and I would not recommend them to my kids until they are 15 or so. But for everyone else, I say read Throne of Glass! I’m certain you’ll enjoy it as much as I did!