A Book for Book Nerds: There's nothing else like this . . . 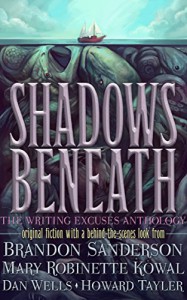 Shadows Beneath is a great book for book nerds--present company included.

Here's how it works:
Brandon Sanderson gets with his author buddies and says, "Hey guys, I want to write book about magic birds." And then they talk about his idea and turn into a story. Of course, they are recording everything they say and they transcribe their conversation. Brandon writes a rough draft of the story and brings it back to his buddies to read. With the record button pushed, they tell him what's awesome and what's not awesome and then transcribe that conversation. He writes another draft of the story, takes careful notes of his changes, and produces a final version. The final version, a really fabulous short story called "Sixth of the Dusk" is published and put at the front of the book. In the back of the book are all the different conversations and drafts that led to the final product.

Then each of his author buddies go through the same process, put their finished products in the front of the book and the production notes at the end.

The finished result is Shadows Beneath, and it's the best peak under the tent I've ever seen regarding the writing process and what goes into producing an awesome story.

The four final, polished short stories in Shadows Beneath are worth the price of admission alone. They were all very entertaining. But the really cool stuff is in the back, where we get to watch this whole process unfold from idea to finished product. I especially liked reading the cuts of the first drafts that include the cross outs and additions that the stories went through.

It's a fascinating book that goes beyond the story. Check it out, I predict you'll be as impressed as I was.