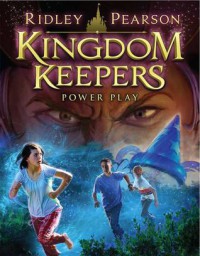 The Kingdom Keepers tricked me! I started the series a couple of weeks ago when the sixth (and supposedly FINAL) book was published. If you've read my reviews, you know I never start a series until I can read the whole series at once....a rule I established after enduring the torture of waiting for each new Harry Potter book. So you can imagine my surprise when I arrived at the end of book 6 of The Kingdom Keepers to find there is still more story left! And not just a little! Oh, and book 7--the REAL series ender--isn't going to be published until APRIL 2014! Sigh.

Oh, well. Minor annoyance I suppose. I'll review the series up to book 6, and when book 7 comes out next year I'll just add to it. Enough. On to the review...

I'm always on the lookout for books my kids might enjoy, and The Kingdom Keepers sounded like a lot of fun. Who wouldn't want to wake up each night somewhere in Disney World as a hologram, where you become the only force for good defending the world against the nefarious plans of all the Disney bad guys? Sounds like a good time to me. Turns out, that fun premise makes for some pretty fun adventures, and The Kingdom Keepers reads quickly and easily. The series definitely finished stronger than it started. I enjoyed the last three much more than the first three.

I do wonder how much Disney paid the author to write these books. They are all Disney propaganda at its best (worst?). I also don't like that dads are portrayed as out of touch idiots...that's a problem in our society that deserves a much more in depth discussion. There are several instances were kids lie and keep things from their parents, and even a couple instances when the mom and the son conspire to hide things from the brain dead dad. I don't appreciate that either. However, I'm still happy to let my kids read The Kingdom Keepers. It's exactly for these types of issues I always preread my kids books, and I'll be able to talk about these issues as they come up.

I hope your family has fun reading The Kingdom Keepers. Now I just have to wait for April 2014 to see what happens next!